Last week was the fifth Dynafit race this season. The Dynafit race is a 3.2km ski touring race starting in Le Praz and finishing in Courchevel 1850. 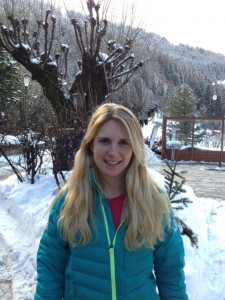 It takes place every Wednesday evening throughout the winter season until the end of March. It is a chance for both the best athletes in this field and first timers to race side by side for either fitness training or to fight for the season record.

On the 8th January a record number of 258 participants turned up to battle up the slope for a special reason: in memory of Lionel Blanc - the man who looked after the Grand Plan refuge, who very sadly died in an avalanche two weeks ago.

So here's my account of the race, - my first ever experience of ski touring. Since being in Courchevel I had seen some very lean and athletic looking people hiking up the mountain on skis to then ski down....ever since I had wanted to do it! When I heard of the Dynafit race I thought I had to do it. A visit to the ski touring Camp de Base shop, earlier in the day, had ended up with me now being the proud new owner of some touring boots and some skis and skins to borrow for the race.

I dashed back down to Le Praz where the race started from, with new gear in hand, to make it on time for the start. The atmosphere was buzzing at registration, with over 250 people getting ready to race. To my relief I saw some people that I knew, as I had never put on touring skis before, and was now about to embark on a race up a steep hill on them. After a quick lesson in how to put the skis on and a few tips on how to skin up, I was ready. 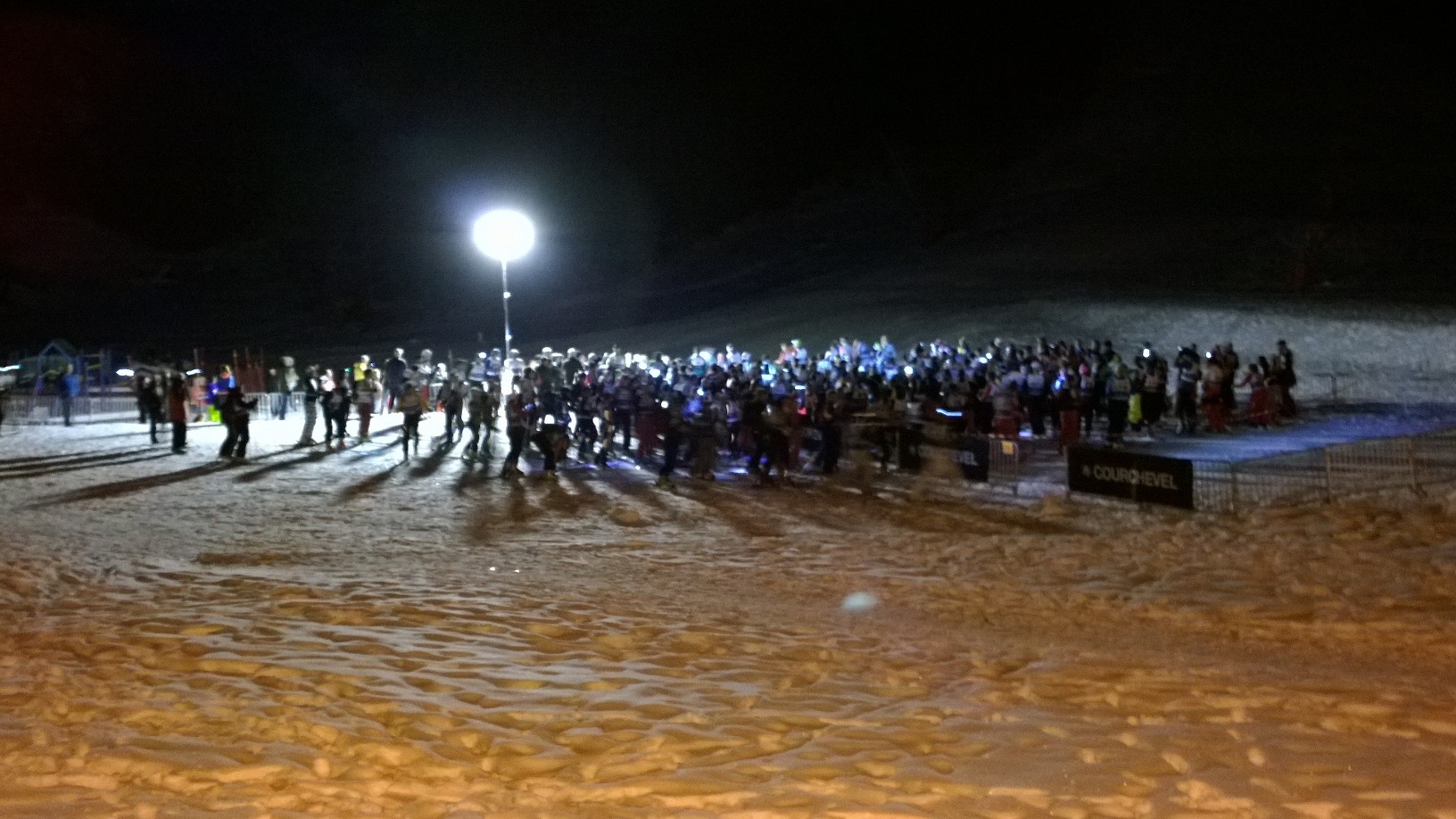 Half an hour later we all lined up in a taped off zone ready for the off. We had positioned ourselves so the fastest were at the front and the slower ones at the back. There were people in full Lycra and the really lightweight kit, specifically designed for racing up the mountain, and then there were those like myself in heavier skis and boots, which are better for going downhill, wishing we were all a lot fitter and had the lighter gear!

There was period of silence in remembrance of Lionel Blanc.

Then the countdown begun....10,9,8,7,6,5,4,3,2,1 and we were off. The people at the front literally started to run on skis and were away in a flash. At the back we all started to slide forwards slightly downhill. Never having put touring skis on before I was immediately at the back. We soon got to the incline though and after that it was foot in front of the other. With the masses of people doing the race I ended up stuck unable to pass anyone for a while...it probably turned out to be quite good pacing strategy for me in the end.

As the crowd thinned out, I started to get into a rhythm; now it was time to claw back some places. For me this race wasn’t simply just about finishing, it was about doing the best time I could. So I was going all out, lungs bursting, muscles that I normally don't use hurting. I was thinking ‘wow my skis are heavy’. I looked ahead and could see a line of lights going all the way up into the trees. It was quiet, no one was talking - everyone was working hard.

The 3.2km course went up the Amoureux red run from Le Praz and then turned off into a track in the forest. Then the really hard work begun. Some parts were really quite steep, after which the flatter bits were warmly welcomed, but there was no time for taking it easy in this race. I pushed on, I began to wonder if I had gone too hard at the beginning. Anyway, it was too late now, I just had to keep going. I was passing people and some were passing me. A couple of guys were wearing fox costumes.

There are distance markers the whole way up...so you always know how far you have to go. At 0.6km to the finish we had come out of the trees and onto the piste and had reached the top of the Le Praz bubble lift…not far now. Before I knew it there was a downhill section to the finish line. ‘Downhill?!’ I thought to myself, ‘Can I do this with skins on?!’ People were flying past me...you clearly can. My arrival to the finish line wasn't as elegant as everyone else...it much more rather consisted of stumbles and trips. But the finish line was there...a big yellow inflatable finish line, surrounded by a crowd of people. A commentator shouted out my number and I had finished!!!

I was greeted by the guys who had finished a few minutes before me. We waited for everyone to finish and then got a team photo. Then it was time to head into the La Croisette lift station building where drinks and lots of little snacks awaited for all the competitors. After a bit of refuelling, we headed to Le Camp de Base (a specialist touring shop in the Forum shopping centre) for the presentation and prizes.

First place man finished in 22 minutes 16 seconds. First place woman finished in 26 minutes 55 seconds. How did they do that?! I had finished in 50:30. A couple of friends got a cheeky photo with the winning man. All eyes were on the winners...who are these super human people who can run up a mountain so fast?

Want to receive more blogs about our culture as a community?

You’ll hear more stories from the people behind New Gen and the ideas that make our company different and special. You can, of course, unsubscribe at any time.